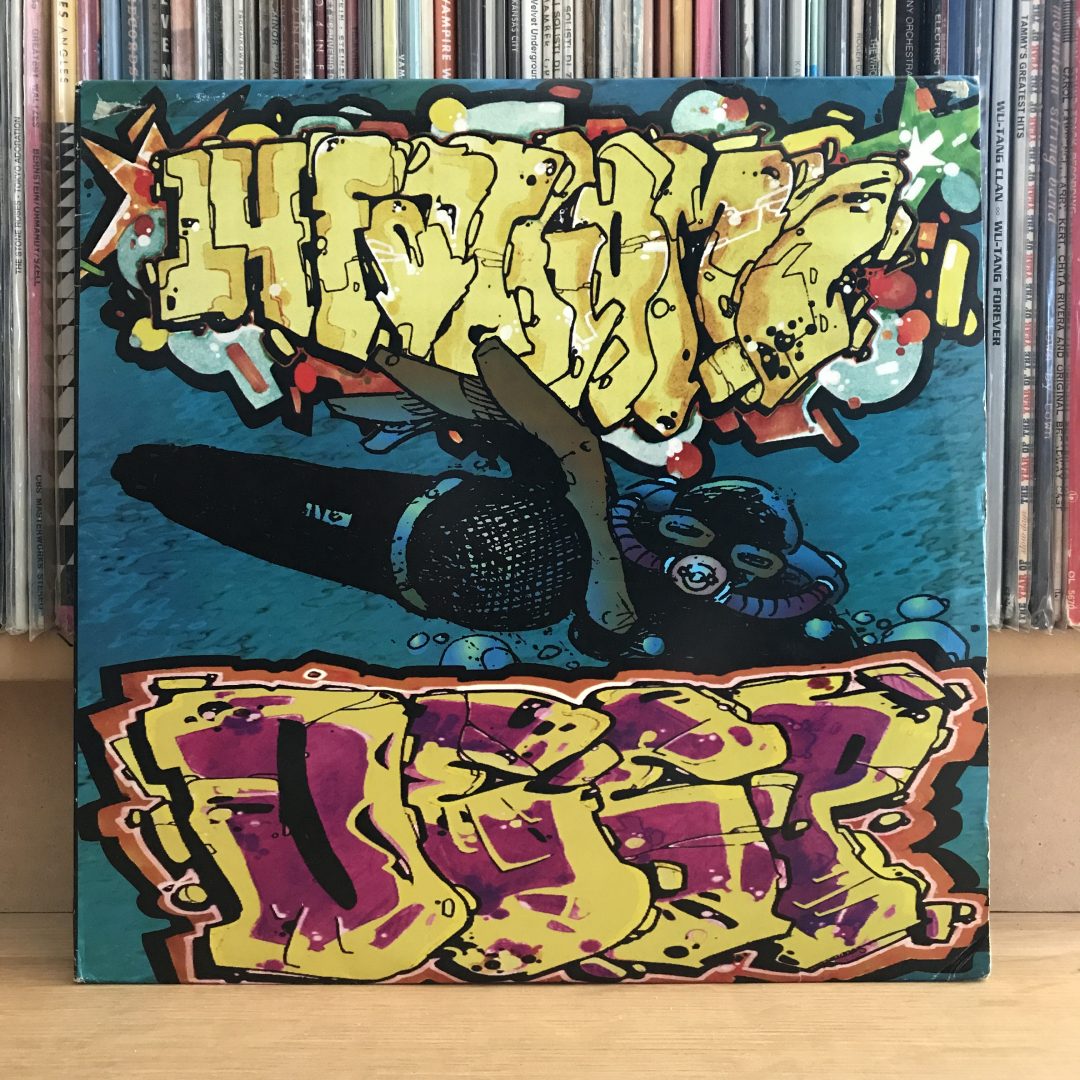 Exponential growth, part two: Andre “Dr. Dre” Young gets on with NWA, and goes on to make some of the best beats ever produced. On Dre’s Deep Cover track he employed the velvet-tongued Snoop, who hasn’t looked back since beginning his pursuit of Death Row domination. Once Snoop hit platinum status, he was quick to put Daz and Kurupt on a disc, and from there forward those two certainly haven’t done too shabbily. The point is this: Every artist has friends they want to help out once they themselves have safely achieved success.

Keeping this in mind, it is with eager anticipation that I await the exponential growth of Seattle’s rap/hip-hop scene following the long-coming release of the new Loosegroove compilation, 14 Fathoms Deep. This record is so heavy it could hang with Tad. Let’s face it: Its weight is just plain ridiculous. This is the kind of music that could inspire 14 empires, build 14 record labels, or, at the very least, boost 14 of Seattle’s hip-hop groups a little bit closer to well-deserved fame and fortune.

Allow me to break it down track by ahead-of-its-time track. Sinsemilla contributes the perfect opener for the compilation, a scherzando club track titled “Drastic Measures.” Verbal twists like, “Down with a criminal Jill we Jack together” can and will get you open extra wide. Next, 22nd Precinct barges in with the unruly honesty of “Great Outdoors”: “It’s a pity the way the city treats the poor” had me thinking of the forgotten and misplaced, huddling over downtown Seattle’s iron steam grates.

“Official Members” by Mad Fanatic (featuring Raychyld) will definitely catch you rewinding. It’s slow and hypnotic, and lyrics like “My rhyme’s deep in the dirt/ Worms can’t find it” beg to be heard twice. DMS furthers the slow groove on “Keep Da Change,” but spiky attitude is the key here: “The six is in the mix so domino motherfucker” rides a keyboard-funk beat.

A powerhouse Source of Labor dazzles with their track, “Cornbread.” It’s all about musical subtlety when lines like “How can you claim to be an MC/When an MC’s what you just can’t be/ You can’t be an MC and not freestyling” make the point undeniable. Ghetto Chilldren get their OJ on with “Court’s in Session,” and Pulp Fiction’s most enduring catchphrase becomes Forrest Gump’s threat to “get medieval on your buttocks.” The sparest of basslines and flute notes flutter prettily behind harsh words like “You stand accused of being wack in the first degree/ Premeditating slang terms for your hardcore soliloquies.” “All Up in the Mix” by Narcotik opens with the most breathtaking sample on 14 Fathoms Deep (“The 206 is in my mix”). The rhyme proceeds to kick some street philosophy with plenty of drinking and smoking thrown in for good measure.

Beginning vinyl side three is Jace (featuring Dionna), with “Ghetto Star.” Its catchy chorus and storyline lyrics ensure this track will be engraved front-and-center in your brain for weeks to come. Beyond Reality–who are listed on the album as Kylin–brings on the spirit of the Jasiri Media Group with their track “Can.” “Let me take your mind on a little mental journey,” invites lead MC Kylea. For the most metaphors per line, look for “Higher Places” by Prose & Concepts, a group that falls into the “survival of the fattest” category.

“Insomniack Museick” by NS of the O.N.E Corporation is probably the moodiest track on the compilation. Dark clouds of drifting keyboards become still more ominous layered behind introspective lyrics such as “Sometimes I’d even trade a nightmare/ Just for 50 winks.” The beat on “Interrogation” by Blind Council bubbles like the scuba gear on the compilation’s cover, and the rhyme is strictly for the connoisseurs out there. Union of Opposites (featuring Shonuph) put down a forward-moving track titled “Continuations”-its relay-style chorus is as fresh as the verses, and the melodic tone moves the disc into another direction entirely. “Wipe off the dust from your mind and recline in my oration.” It’s at once relaxing and educating.

The last cut, also by far the longest, is the most difficult to categorize. The group is the Crew Clockwise and their song, titled “A New Day,” is a heady mix of the many styles showcased on 14 Fathoms Deep. Now I know what Specs meant on Do the Math when he said, “Soon to hit wax I can’t wait.”

So now you know the deal. When these groups start putting their friends on future projects, it may mean more than some heads can handle. 14 Fathoms Deep is not just another hip-hop compilation. In actuality, it’s a promise of even lovelier things to come. Instead of talking about how materialistic and useless today’s rap is, these 14 groups are doing something positive and proactive. Rap music is not dead. Seattle has the Phoenix in the mix. (This review originally appeared in The Stranger in 1997 and was written by Novocaine132.)

14 Fathoms Deep was created in 1997 and features appearances from: 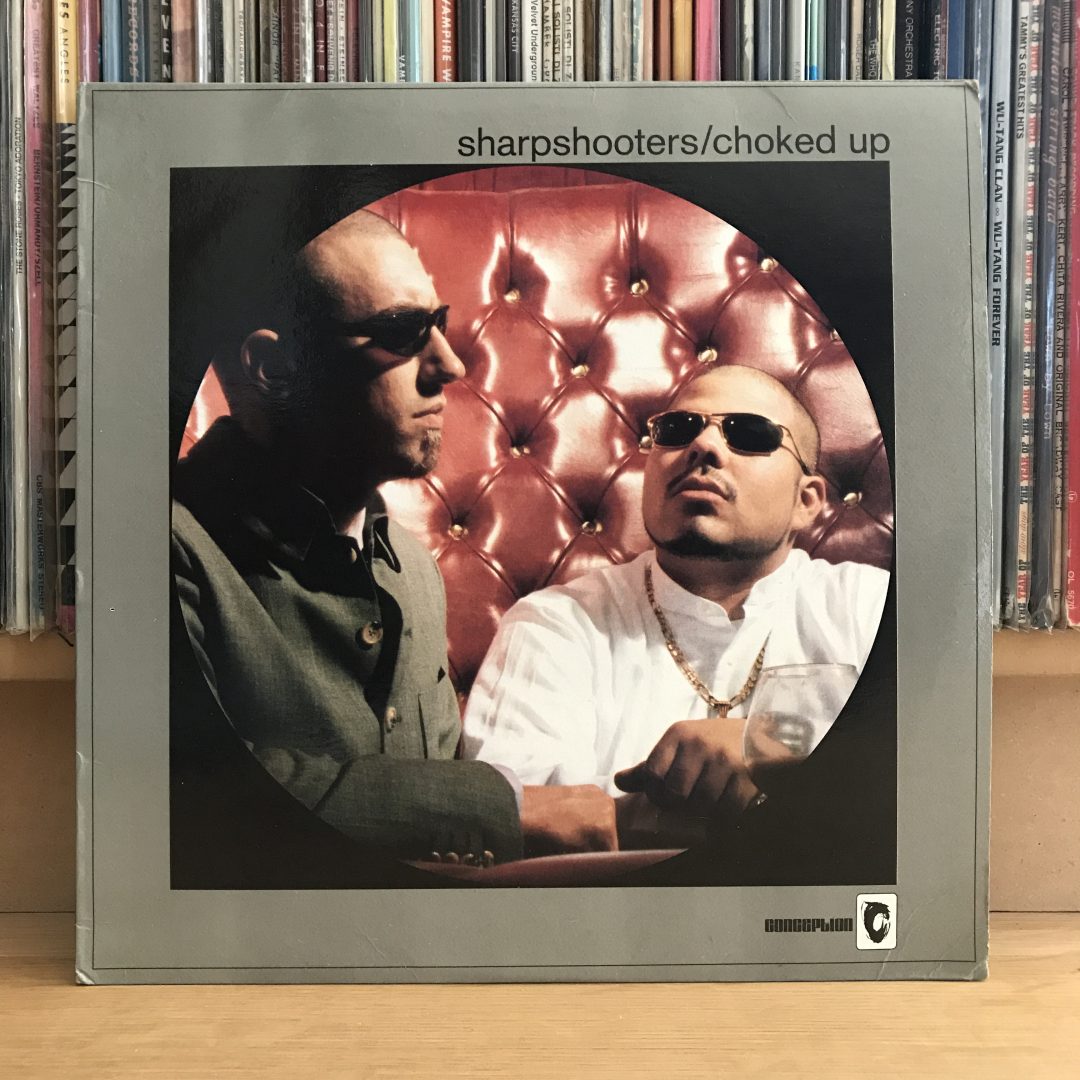 Here is an entirely terrific album of grooved beats, laidback flows, judiciously selected samples (lots of funky jazz), and first-rate production. The fact that it’s by two locals–Mr. Supreme and Sureshot–means a modern hip-hop collection that it’s the first album to offer the full scope of a Seattle hip-hop band over the course of an entire LP. instead of a narrow glimpse, like those offered on recent Seattle hip-hop comps 14 Fathoms Deep and Do the Math.

Choked Up starts with an absolute wallop as “Lifted,” an organ vamp with a beat, intros the LP. The first real song, “Heavyweight,” features a fat, acid jazz horn chart squatting on top of strong percussion. There’s a taste of entirely palatable turntable work as the first impression hits like a bolt from the blue: Could this be jazz and hip-hop? Could this be really, really good jazzy hip-hop?

The third track establishes the legitimacy of Sharpshooters. They begin with “Analyze,” a drifting, underwater beat just long enough to set the stage for the boss rhymes of Trust (The Soul Trooper). At this point, the album is about perfect. Three fat tracks, not a dud. When Trust drops a thoroughly chilled line about our favorite hoops team, it seems just like hip hop heaven.

The LP rolls, moving easily forward instrumentals dovetailed perfectly wh the raps. The beats are brisk, the horns well-tempered, the flows right on production huge, and the guest appearances (Kylea, Wordsayer, and Mad Fanatic) add to the album while not subtracting from the band.

Presently, there is a load of overhyped hip-hop from which to choose. Much of it, especially from the big-name, big-image rappers, doesn’t measure up. This record delivers. The fact that they’re local and sending shoutouts all over town is just gravy. (This review originally appeared in The Rocket and was written by S. Duda.)

Choked Up was originally released on Conception Records and later reissued on New York-based Shadow Records. In the time they were around, Shadow managed to introduce some of the most memorable and enduring acid jazz records to the American audience. DJ Krush had his American debut with his album Krush, as did DJ Cam’s Mad Blunted Jazz. Funki Porcini, 9 Lazy 9, Dj Food, and Up, Bustle, and Out were just a few other notable names on Shadow’s roster. Shadow was distinctive and catered to a specific audience who was into trendy, late-90’s trip-hop and acid jazz. Although the Sharpshooters were a Northwest group, I probably wouldn’t have known about them if they hadn’t been part of the Shadow Records family… Even if I did live in the same city as them.

The Sharpshooters were a duo consisting of Seattle producers Mr. Supreme and DJ Sureshot. Supreme distributed their work on his own indie hip-hop label, Conception Records. And, although they were local, Conception at that time was just starting and had some steam to build still. So, it was through a distribution deal with a label that specialized in waking up American audiences to foreign artists that I heard about a group and label that lived a couple of miles from me. Their sophomore release, Choked Up, is a cool, blunted slab of jazzy hip-hop. Flutes, saxes, and vibes dominate the mix as much as the drum loops do, creating a smoky blend of coffee-house jazz hop. Vocal guests including Four Fifths, Mad Fanatic, and Kylea from Beyond Reality add flavor to a few select tracks.

I have an idea. Do yourself a favor; save this record for the summer. Put this on a playlist along with other like-minded albums of the time (Krush’s self-titled record, Digable Planets’ Blowout Comb, and Guru’s Jazzmatazz vol.2 are good recommendations). Find something pretty to look at. Then sit back in the evening, let the records play, and see where you go. (This review originally appeared on the Bring That Beat Back blog and was written by Jack Devo.)

Choked Up was created in 1996 and features appearances from: 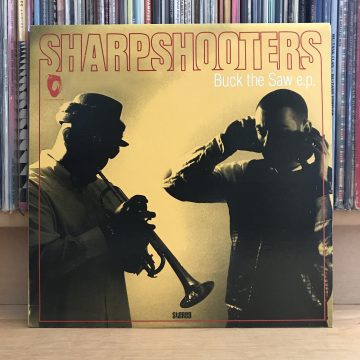 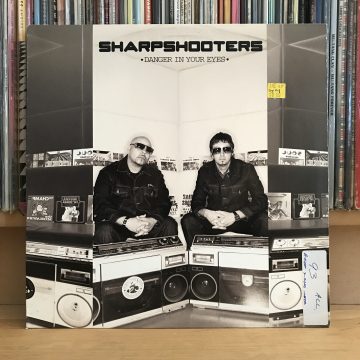 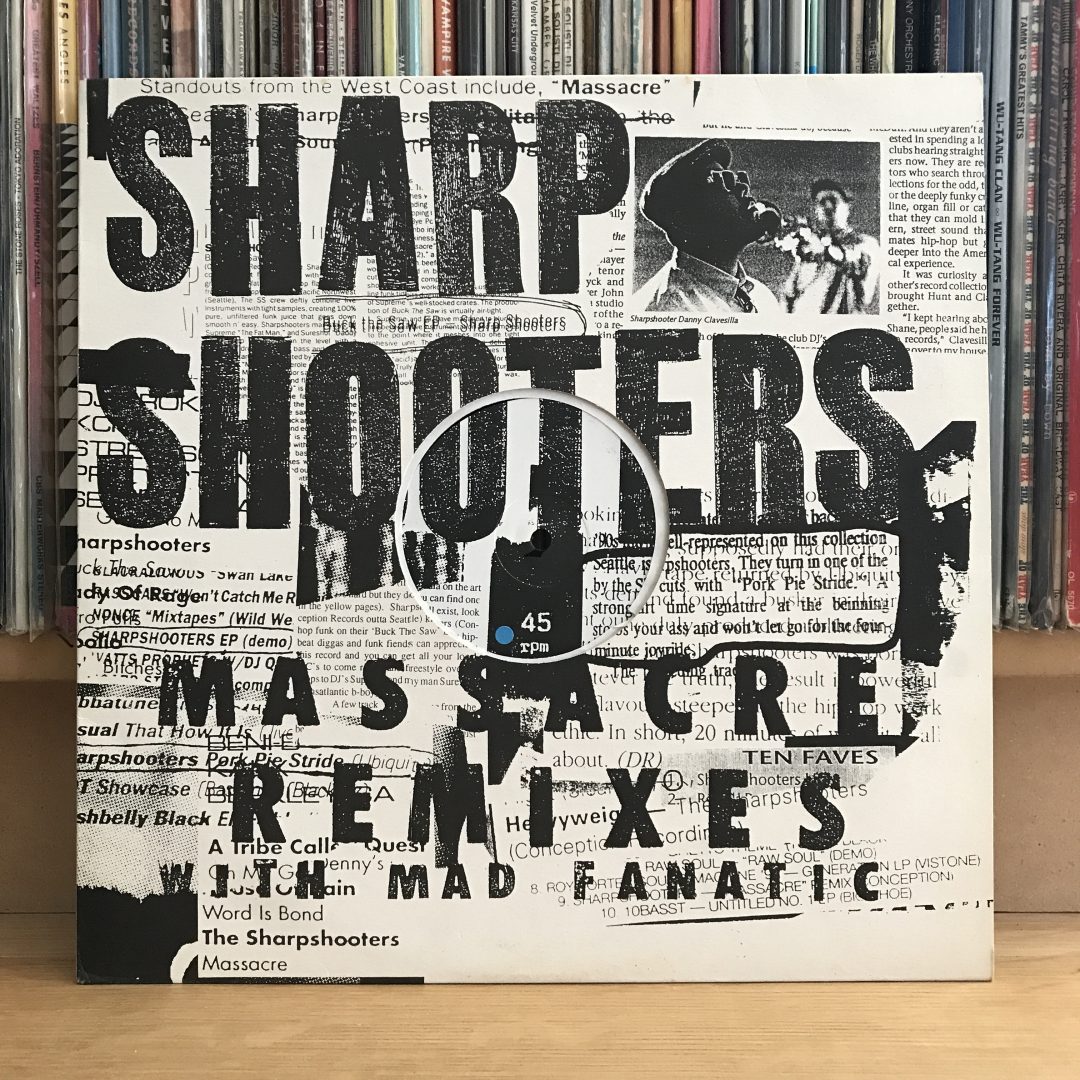 Massacre Remixes was created in 1994 and features appearances from: 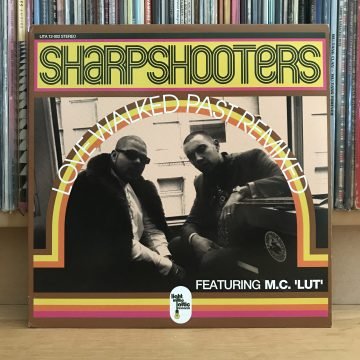 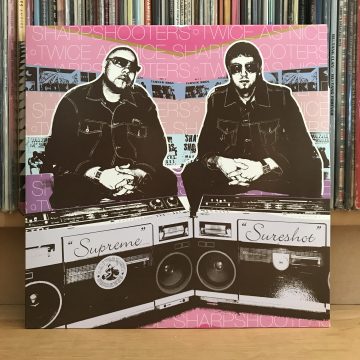